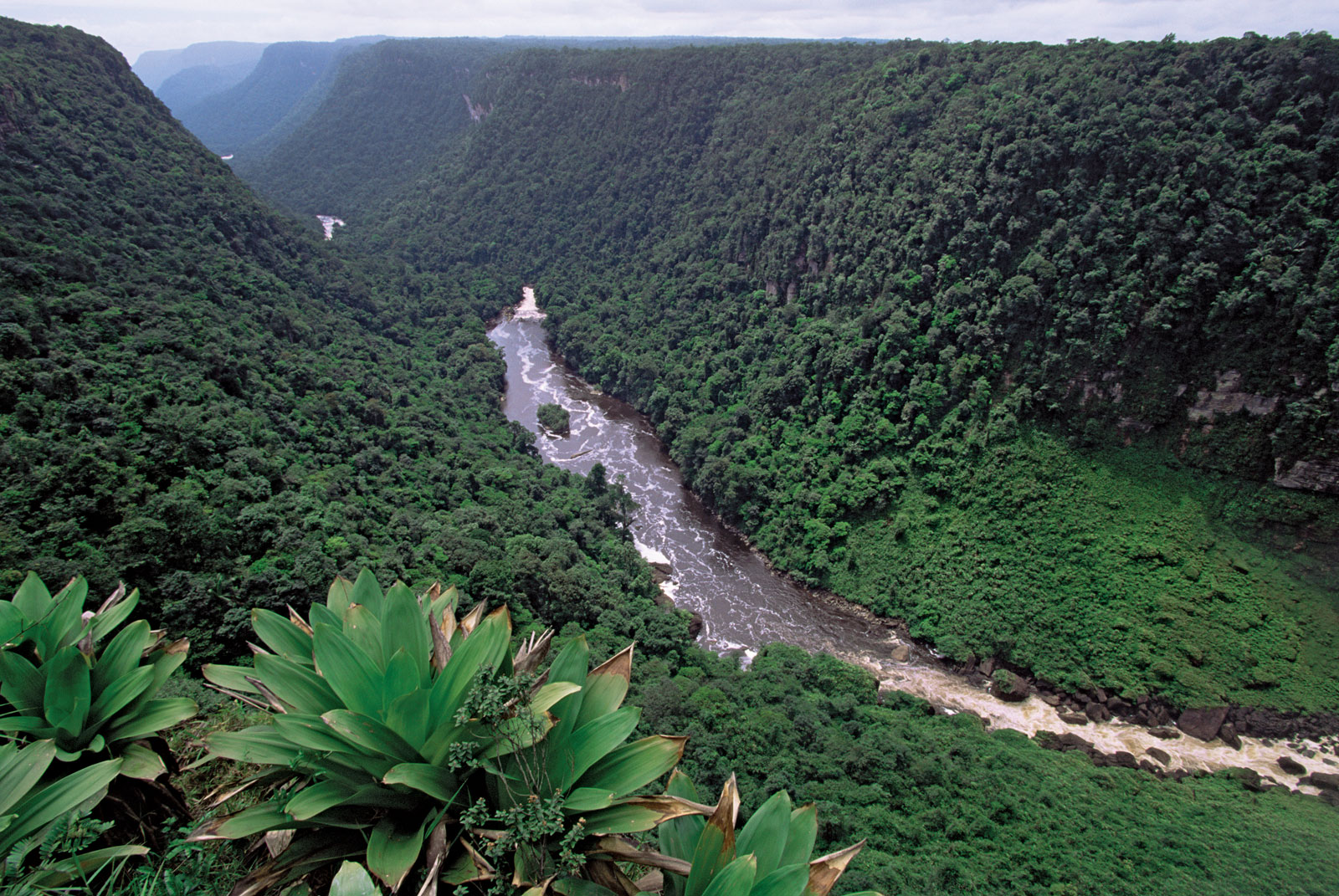 Guyana can be called as a paradise for nature lovers, the eco-tourist and adventure seekers alike. The country has an irresistible combination of breathtaking and fascinating natural beauty, immense waterfalls, pristine Amazonian rainforests and of course, amazing wildlife blended with a rich heritage, vibrant indigenous culture and the most friendly and hospitable people in the world. With its biological diversity, natural beauty and a land of some of the rarest, spectacular and largest creatures, a trip to the land of Guyana will undoubtedly be a memorable experience for anybody.

Kaieteur Waterfalls
One of the world’s stunning and mind-blowing natural wonders is the Kaieteur Waterfalls, tumbling down over 741 feet! Kaieteur, which is located in the Kaieteur National Park is a refuge to a number of endangered and rarest species on the earth. A few species of fauna and flora that can be found in plenty in and around Kaieteur include tiny golden frogs, colourful Guyana cock-of-the-rock and blue morph butterflies. Kaieteur is one among the 300 waterfalls found in Guyana and holds the credit of being the longest single drop waterfall in the entire world, which is five times the size of gorgeous Niagara!

Kanuku Mountains
For adventure and nature lovers, the Kanuku Mountains, which has got the recognition by the Conservation International for being one among the few remaining pristine habitats of Amazon, is the most apt place to visit. This picturesque and splendid mountain range forms a wondrous backdrop to the Rupununi Savannahs, whose sculptured crowns peak just below the thick white clouds.

Iwokrama Forest
With the continuously growing concerns about the climate and environmental change, Guyana has the most unique and protected areas on the earth, which is none other than the Iwokrama forest. Iwokrama occupies almost one million acres of thick lush green forest, which serves as a wonderland for adventure-seekers and nature enthusiasts. This forest, which touts to be known as the ‘Green Heart of Guyana’ is highly rich in untouched beauty and natural resources and is often visited by a number of biologists and scientists across the world.

Shell Beach
Along the north-western shores of Guyana, the Shell Beach extends for about 90 miles. The beach got its name from the intact to finely destroyed sea shells of bivalves, molluscs and univalves, which cover the stretch of the beach. Shell beach is said to be a unique ecosystem comprising of inland swamp forests, savannahs and mangrove forests bordered by the sea board of the Atlantic. This beach serves as the favorite nesting ground for four among the eight species of marine turtles of the world namely, Olive Ridley, Green, Hawksbill and the Leatherback, which visit this place every year between the month of March and July for nesting among the shells.

Mount Roraima
Mount Roraima, which is almost 1700 million years old, is the most famous one in the world. Before the tectonic activity which moved apart the continents of South America and Africa, this oldest flat topped mountain was at one time, part of the Gondwanaland. It would definitely be a thrilling and exciting experience to stand on this lunar like surface with crystal bed of rocks, unique species of flora and pools of cold clear water, all around you.

Not only does the country of Guyana offer a varied range of habitats – from savannah to coastal lagoons, from rainforest to tree-old foothills, but historical accident has paved way to make Guyana, the only English-speaking land in the continent of South America